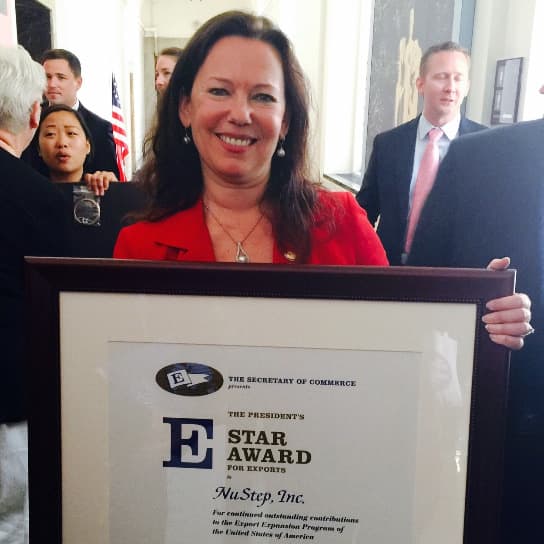 On May 17th, 2016, U.S. Secretary of Commerce Penny Pritzker presented NuStep, Inc. with the President's "E" Star Award for Exports at a ceremony in Washington, DC. The President's "E" Award is the highest recognition any U.S. entity can receive for making a significant contribution to the expansion of U.S. exports.  Elena Stegemann, director of international business at NuStep and a member of the East Michigan District Export Council, traveled to Washington to accept the award.

"NuStep has demonstrated a sustained commitment to export expansion. The "E" Awards Committee was very impressed with NuStep's role as a thought leader to the manufacturing community on the value of exports to a strong U.S. economy. The company's commitment to providing internship opportunities to international business students was also particularly notable. NuStep's achievements have undoubtedly contributed to national export expansion efforts that support the U.S. economy and create American jobs," said Secretary Pritzker in her congratulatory letter to the company announcing its selection as an award recipient.

NuStep, Inc. designs and manufactures three recumbent cross trainer models in Ann Arbor, Mich. The company's products are used in healthcare, senior living, fitness and private home settings around the world. "Exporting continues to be the foundation of our sales growth, and we are honored to receive the "E" Award," said Dick Sarns, founder and CEO of NuStep, Inc. "Although we have been exporting our products since 1995, we intensified our efforts in 2009 and, since then, export sales have grown to nearly 20 percent of our total sales, enabling us to sustain jobs and even expand our work force. In addition, we're proud of the growing global base of NuStep customers whose lives have been transformed through the use of our inclusive, award-winning health and wellness products."

In 1961, President Kennedy signed an executive order reviving the World War II "E" symbol of excellence to honor and provide recognition to America's exporters. Today, Secretary Pritzker honored 123 U.S. companies with the President's "E" Award for their outstanding work to reduce barriers to foreign markets and to open the door to more trade around the world.

U.S. companies are nominated for the "E" Awards through the Department of Commerce's U.S. Commercial Service office network, located within the Department's International Trade Administration, with offices in 108 U.S. cities and more than 70 countries. Record years of successive export growth and an applicant's demonstration of an innovative international marketing plan that led to the increase in exports is a significant factor in selecting the winners.