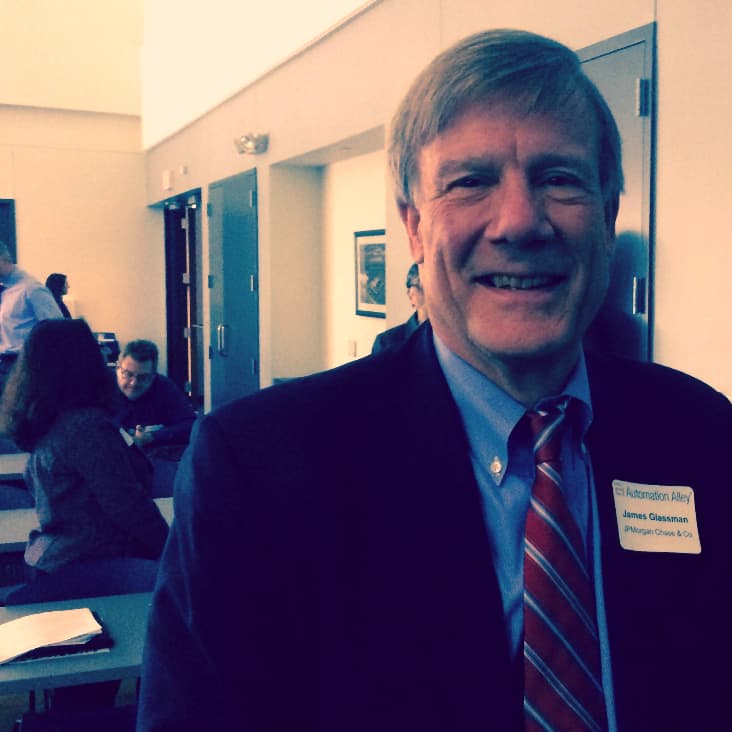 James Glassman, Head Economist for Commercial Banking at J.P. Morgan Chase was very bullish on the prospects for a sustained US economic recovery during his address at the Global Economic and Industry Outlook for 2015 and Beyond event. Organized by Automation Alley in Troy, this session on January 22nd attracted business leaders from across Southeast Michigan.

Mr. Glassman used a baseball analogy to describe that we're only in the sixth inning of the recovery and we have a long way to go yet. He is optimistic about the prospects for the United States into at least 2018 or 2019 and expects growth in 2015 with 3.5% to 4%.

He addressed the issue of why the Federal Reserve has been able to buy so much debt issued by the Treasury and for these reserves to pileup without triggering inflation. He believes it is because these reserves are not being used in the general economy. If lenders and borrowers are risk-verse, this money simply piles up as reserves. This is a similar phenomenon to World War II, and the public bought war bonds as a patriotic duty, which kept interest rates low.

He also addressed the issue of why the European Bank is only now engaging quantitative easing about six years after the United States Federal Reserve. He said this is because the European bank has a single mandate which is to keep inflation under control. In contrast, the United States Federal Reserve has a dual mandate -- to keep both inflation and unemployment low. By attacking high unemployment early with aggressive monetary policy, the US got a start of around five years relative to their European counterparts who are only engaging in quantitative easing now.

The United States is unique in that almost all residential loans going into mortgage-backed securities. If the housing market changes, we reprice the securities and lenders add more reserves to cover lower values. We do that quickly in the US while other countries such as Japan do not reprice rapidly. This failure to write down the value of losses is why it has taken Japan so long to adjust relative to the United States.

At the height of our real estate problems in the last two years, our housing stock was underwater to the tune of about $3 trillion. The market has recovered about 2.2 trillion of that and another 600 billion has been written off. That only leaves about $200 billion left before the prior mess is cleaned up. This will remove a major millstone from the neck of the US economy.

Mr. Glassman believes that Japan will rebound quickly in 2015 due to exports linked to yen depreciation.

If one examines the US recovery, is a broad and diversified recovery not just in the oil and gas states. Michigan has rebounded well along with most other states.

Mr. Glassman tends to look at the production side of the economy, not the demand site. For example, he follows weekly applications for unemployment benefits very closely. He believes that if jobless claims stay in the range of 275,000 to 325,000 per month, this will confirm that the current recovery is on track.

He went on to say that when oil prices drop, it increases optimism. It greatly impacts countries who consume more oil than they produce. As a consequence, Canada will be badly hit as it is a major oil producer.

He believes that the current windfall from lower oil prices is about $100 billion to $120 billion. On a global basis, this amounts to transfer of about $1.5 trillion from oil producers to oil consumers.

The official employment rate also does not take into account young adults who have gone back to school to study. The participation rate shows that 2 to 3 million 25-year-olds went back to school and disappeared off the unemployment rolls. They will reenter the workforce in the future. When one adjusts these factors, the "true" unemployment rate is around 7% not 5.7%. This figure is derived by adding back the part-timers in the 25-year-old student population.

Mr. Glassman does not see any inflationary pressures yet. It will take several more years until we reach full employment during which time the gift of low oil prices will re-energize the economy. He predicts that the Federal Reserve will begin to raise interest rates in 2015 but that the rise will be extremely slow.

He pointed out an interesting fact, namely, that as much oil is transported through the US rail system as flows through the Suez Canal.

He does not see any really disturbing signs on the immediate horizon for the US economy. He worries about some event that we cannot imagine. He thinks we should start worrying when the psychology is that nothing can go wrong but he does not believe that we are there yet.

He considers that interest rates are a barometer of economic health and that therefore a 0% interest rate is not a great sign. He believes that full employment will take until about 2018 to 2019 and does not see any major financial excesses yet. He expects it to take several years before interest rates reached 3% to 4%.

Regarding China, he does not consider its slowing economy to be a bad thing. It is only natural that China's gross domestic product per person slows as it becomes wealthier. When an economy starts from a low base, the standard of living is very low and initial growth is very rapid. As the income gap closes with wealthy nations, it is only to be expected that growth will slow.